A Quick Word on Battery Expectations

Optima batteries work a lot like regular batteries with some added features. A dark-cased RedTop or BlueTop Optima is a starting battery.

Starting batteries are designed to be discharged a little, then be charged up fairly quickly by your charging system. Basically, the starter skims off some electricity from the battery for starting, and it's rapidly refilled once you start up.

A light-cased YellowTop or BlueTop Optima is a deep cycle battery.

Deep cycle batteries are designed to be discharged a lot, then charged up. In this case, a winch, a stereo, or an on-board 12V fridge scoops a lot of electricity from the battery, and then it's refilled by your charging system.

Make sure you choose the right Optima battery for what you need.

Tools You Need to Check Your Optima Battery

You're going to need a couple of things to check your Optima.

First, you need a multimeter or voltmeter. It needs to measure battery voltage, so you'll want to set it correctly. Most multimeters have a '20 VDC' position, and that's where you want to be.

Warning!You need to take fairly accurate readings of your Optima's voltage. We've found that some of the cheaper multimeters out there aren't always very accurate (like that free one from Harbor Freight) so keep that in mind if your readings are right on the edge of a zone.

It's helpful to have a vehicle so you can load test the battery, plus a helper.

Lastly, you should have a charger that charges AGM batteries. Many people don't know this, but a conventional battery charger won't work with an Optima battery that's discharged below 10.5V.

An alternative to an Optima-specific charger:

For some reason, many of us overcomplicate our solutions and diagnosis of problems (We do it here at Roundforge too!).

Before assuming your Optima has gone bad, check your battery connections for corrosion and tightness. This is probably one of the most common problem people have with batteries, but it's often not checked. This means:

Clean corrosion with sandpaper so that you connect to clean, bare metal. Use a wrench to make clamps and other connections reasonably tight (but not so tight that you damage a battery post!).

Bad connections and particularly bad grounds are one of the easiest problems to fix but often one of the last things that we check! Always check your connections first!

Before you start, make sure your Optima is 'charged'. What we mean by this is that it should be in whatever state you think is charged, whether that means that it's been on a charger for a bit or that you just drove around for a while.

(The point here is that you didn't just pull the Optima out of your shed where it's been sitting for the last 6 months, or that you're not testing it after using it to power the disco ball at your neighbor's midnight rave party. We want the battery in a normal state.)

This is your first reading - here's how to interpret it:

Anything in this range means that you have normal charge and you're in the right range for an Optima.

If your Optima is in this range and you think it should be charged, it's not taking or not holding a charge. This usually means that your battery is sulfated, which happens when it sits for a long time (not charging) or is deeply discharged when it shouldn't be. Or it's just old.

This is highly discharged but usually still recoverable. 0 volts usually means that you've got a short somewhere in the battery - it'll need to be replaced. If it's reading a low voltage, it's probably sulfated and probably needs replacement.

If your Optima's voltage is okay, it still might not perform well under load. You can load test it by going to an auto parts store (they all have battery testers nowadays) or do it yourself with a multimeter.

We load test it by hooking it up to a vehicle and checking the voltage while running the starter. Here's what to do:

Like before, your multimeter will be set to 20VDC, or whatever gets you in that 12 volt DC range.

Touch the red probe to the positive terminal on the Optima and touch the black probe to the negative Optima terminal.

Then have a helper try to start your 4x4. (Tip: If we're solo, we put the multimeter on the windshield and use long alligator clips to reach the battery.)

Watch the multimeter as the starter motor is turning, not when you're started up!

When the starter motor is turning over the engine, that is the heavy load we're using to see how the battery performs. Once started, the alternator will start push the voltage up - we aren't interested in alternator voltage since that tells you about charging, not the condition of your Optima.

If the voltage doesn't hold at 9.5-10.5 volts for 30 seconds, it means your battery is toast. This is usually one of two things:

The reason an open cell looks okay in no-load testing your Optima is heat:

A warm battery can expand inside and things that should touch don't touch anymore. Similarly, terminal contacts can break or crack internally. When cold, they may touch and flow current, but when they warm up they break contact.

Normal chargers won't always work with an Optima battery. It depends a lot on how deeply it's been discharged.

The reason for this is simple - Optimas are AGM batteries and AGMs have a very low internal resistance. The low internal resistance allows them to put out a lot of electricity and be discharged more than a regular battery. (Although repeated discharging a dark-cased RedTop or BlueTop is not good for longevity).

When a regular battery charger is hooked up to an Optima, it often won't even turn on - while the Optima could be charged, the charger thinks it's totally kaput (like a regular battery would be) and doesn't even come on. This usually happens when the Optima measures around 10.5 volts.

How do you fix this? You have two options:

Use an AGM-Compatible Charger For Your Optima

If you buy a charger for AGM batteries, it's easy to charge up a dead AGM. You hook it up and go. There are some additional benefits:

This is the easiest way to charge or maintain an AGM battery like an Optima.

Trick Your 'Standard' Charger With Another Battery

If you don't want to buy an AGM charger, no problem. You can DIY a charging setup in a pinch. Here's what you need:

The general concept here is that you charge the discharged 'regular' battery with the battery charger, but you also hook up the Optima to piggyback on the regular battery.

What we're doing is this:

By attaching the Optima to the regular battery, we can draw off some current to charge the Optima.

The goal here is to get the Optima up to 10.5 volts, then hook it directly to your charger.

Here's how to do it: 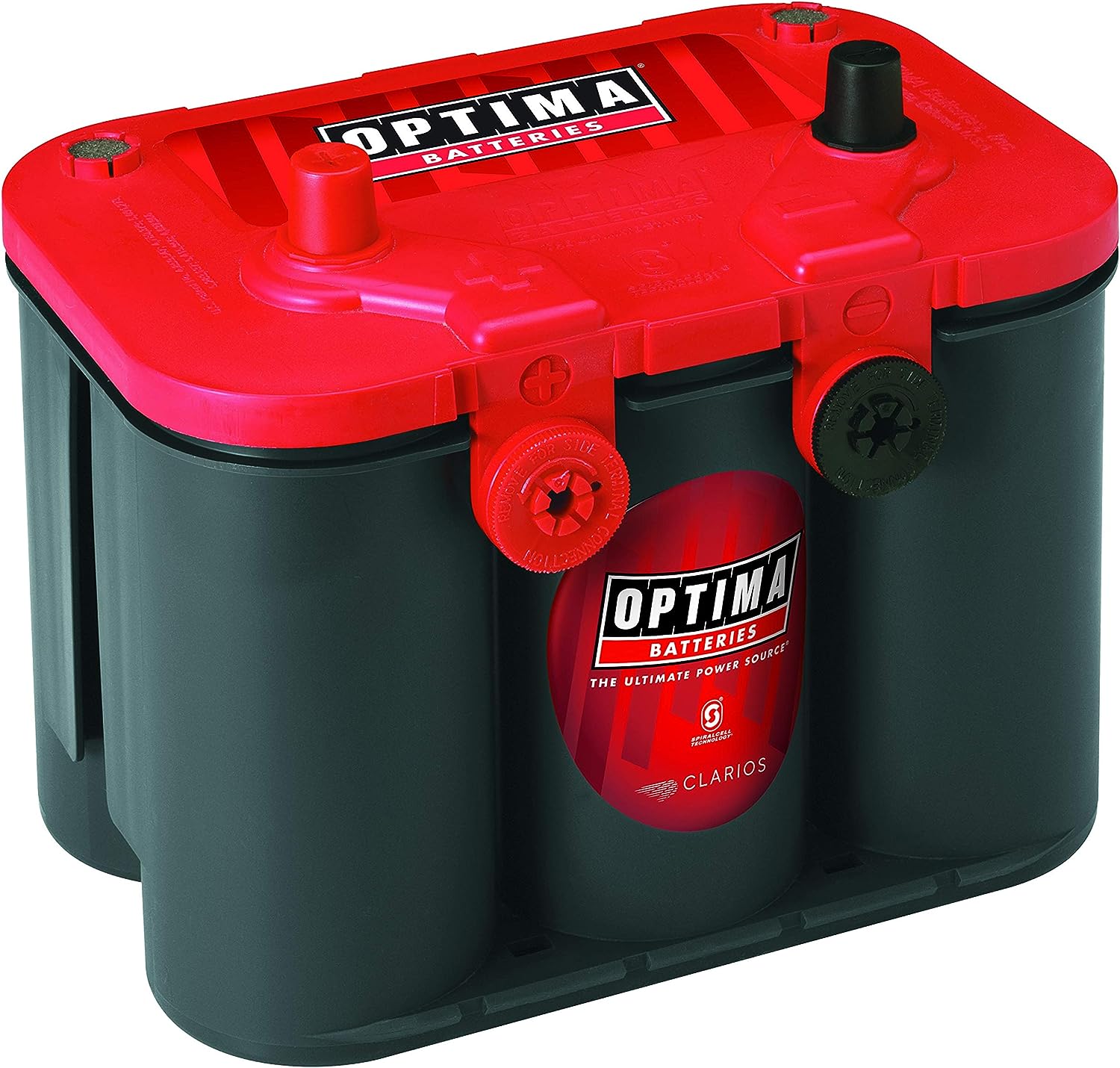 Let battery rest for at least 8 hours. A fully charged Optima will have an open circuit voltage of: Red Top12.85 volts, Yellow Top 13.0 volts 5.Test: Use your organizations approved tester. Load Test: Discharge at approximately ½ battery rated CCA for 15 seconds. On a good battery, volts at 15 seconds should be 9.6 V. 1-16 of 33 results for 'optima red top battery' Filter results by your vehicle: Enter a new vehicle to add it to Your Garage and filter the results below. Enter a new vehicle Optima Batteries OPT8022-091 8022-091 75/25 RedTop Starting Battery. 4.4 out of 5 stars 811. The ultimate performance battery for cars, trucks & SUV's, the Optima Redtop sealed car battery is the best in class battery replacement option. Optima batteries promise impressive high-power delivery and extreme resistance to the most common causes of battery failure.