For many years Simple Object Access Protocol (SOAP) was the standard approach for communicating with remote services, often via HTTP. The landscape has changed significantly in recent years with the increase in the adoption of Representational State Transfer (REST) APIs. There are still a number of use cases that suit SOAP, for example where stateful operations are required.

One of the six guiding architectural principles of REST is statelessness. Every API request from the client to a server must contain all the necessary information necessary to serve the request. The server maintains neither state nor context.How do we then authorise access to protected REST APIs? Say hello to OAuth and JSON Web Token (JWT). OAuth and JWT are two of the most widely used token frameworks or standards for authorising access to REST APIs. In this blog post I consider how both OAuth and JWT can be combined to gain performance improvements.

OAuth enables an application to obtain limited access to an HTTP service. While JWT is a compact, URL-safe means of representing claims to be transferred between two parties. OAuth has a number of grant types. So whenever I refer to OAuth in this blog post, I am referring to the OAuth 2.0 Resource Owner Password Credentials Grant type. A user is required to authenticate or login to obtain a token. A typical authentication flow is shown in the sequence diagram below.

A user will enter their username and password via a client (which could be a mobile device or PC), and at the end of the authentication process the user will be supplied with a token. The client will then include the token with every subsequent API request to a resource server (like the User server). To compare what the authorisation flow for both OAuth and JWT will look like, let’s consider an example where we make an API request to GET the authenticated user.

The OAuth flow to GET the authenticated user whose ID is 123 will typically look like the sequence diagram below.

While, the JWT flow to GET the authenticated user whose ID is 123 will typically look like the sequence diagram below.

The JWT implementation is less chatty and more performant compared to OAuth. This is because JWT enables a resource server to verify the token locally. In its compact form, JWT consist of three parts: the header, payload and signature. The signature is the result of signing the base64Url encoded header and the base64Url encoded payload with a key. The resource server uses the signature to verify that the token has not been tampered with.

JSON Web Token is a compact JSON format useful for exchanging information between parties. The OpenID Connect specification mandates the use of JWT as the format of the ID token. The entire JWT is Base64Url encoded and is split in three parts, separated by dots. In a sequence diagram: The Authorization Server (NodeJS) and the Resource Provider (C# WebAPI) can run on 2 totally different servers or clouds. Instead of using public private key to sign. One of the features that Istio come with out of the box is the ability to validate the JWT tokens that comes inside a client request header(if the server implements JWT token Authentication that is). In the next image we see a very simplified overview of the test execution to access Authors Microservice using Keycloak, OpenLiberty, MicroProfile and JWT, is shown in the sequence diagram below. Start the JUnit test called TestGetAuthors.

The JWT payload contains the claims. The claims are statements about an entity (typically, the user excluding private information of course) and additional metadata like the expiry time. JWT however has a drawback in that once it has been issued it will allow its holder to gain access to a resource server until the expiry time is lapsed. It looks like we need a way to revoke JWTs. So let’s go back to OAuth.

OAuth is chattier compared to JWT. This is because OAuth requires the Auth server to verify the validity of the token and the Auth server in turn relies on the information it has stored in a database to make this judgement. OAuth however does have an advantage over JWT in that tokens can be easily revoked. This is particularly a good feature if instant access revocation is desired. The basic OAuth token response is shown below.

The relevant attributes are described in the table below.

As shown in the example OAuth flow above, the client will include the access token in every API request to a resource server. The client will then make use of the refresh token to obtain a new access token. How can we benefit from the inherent performance advantages associated with JWT and the limited access capability provided by OAuth? By issuing an OAuth token with JWT in both access token and refresh tokens as depicted below.

Finally, there may be scenarios where this behaviour is not desired but ultimately, it depends on the requirements of the system. This approach enables the resource server to validate the OAuth access token locally and only requires interaction with the Auth server when we need to get a new OAuth access token. It is this reduction in the interaction with the Auth server that gives us the performance improvements.

NEW: get the JWT Handbook for free and learn JWTs in depth!

What is JSON Web Token?

JSON Web Token (JWT) is an open standard (RFC 7519) that defines a compact and self-contained way for securely transmitting information between parties as a JSON object. This information can be verified and trusted because it is digitally signed. JWTs can be signed using a secret (with the HMAC algorithm) or a public/private key pair using RSA or ECDSA.

Although JWTs can be encrypted to also provide secrecy between parties, we will focus on signed tokens. Signed tokens can verify the integrity of the claims contained within it, while encrypted tokens hide those claims from other parties. When tokens are signed using public/private key pairs, the signature also certifies that only the party holding the private key is the one that signed it.

When should you use JSON Web Tokens?

Here are some scenarios where JSON Web Tokens are useful:

What is the JSON Web Token structure? 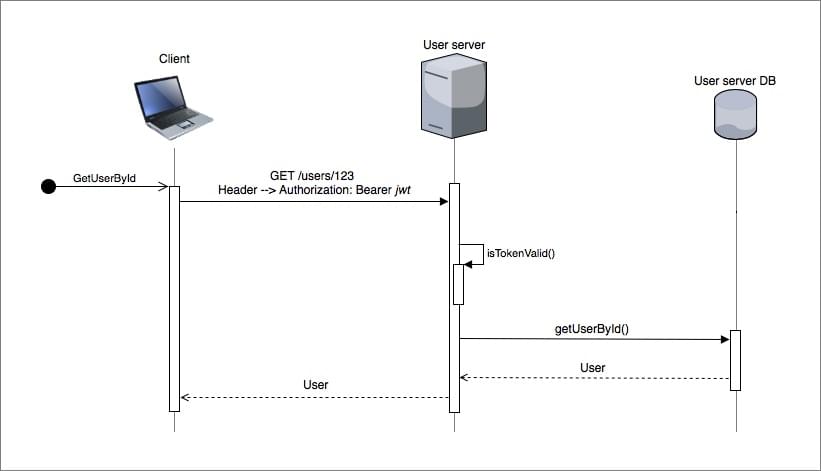 In its compact form, JSON Web Tokens consist of three parts separated by dots (.), which are:

Let's break down the different parts.

The header typically consists of two parts: the type of the token, which is JWT, and the signing algorithm being used, such as HMAC SHA256 or RSA.

Then, this JSON is Base64Url encoded to form the first part of the JWT.

The second part of the token is the payload, which contains the claims. Claims are statements about an entity (typically, the user) and additional data.There are three types of claims: registered, public, and private claims.

An example payload could be:

The payload is then Base64Url encoded to form the second part of the JSON Web Token.

Do note that for signed tokens this information, though protected against tampering, is readable by anyone. Do not put secret information in the payload or header elements of a JWT unless it is encrypted.

To create the signature part you have to take the encoded header, the encoded payload, a secret, the algorithm specified in the header, and sign that.

For example if you want to use the HMAC SHA256 algorithm, the signature will be created in the following way:

The signature is used to verify the message wasn't changed along the way, and, in the case of tokens signed with a private key, it can also verify that the sender of the JWT is who it says it is.

The output is three Base64-URL strings separated by dots that can be easily passed in HTML and HTTP environments, while being more compact when compared to XML-based standards such as SAML.

The following shows a JWT that has the previous header and payload encoded, and it is signed with a secret.

If you want to play with JWT and put these concepts into practice, you can use jwt.io Debugger to decode, verify, and generate JWTs.

How do JSON Web Tokens work?

In authentication, when the user successfully logs in using their credentials, a JSON Web Token will be returned. Since tokens are credentials, great care must be taken to prevent security issues. In general, you should not keep tokens longer than required.

You also should not store sensitive session data in browser storage due to lack of security.

Whenever the user wants to access a protected route or resource, the user agent should send the JWT, typically in the Authorization header using the Bearer schema. The content of the header should look like the following:

This can be, in certain cases, a stateless authorization mechanism. The server's protected routes will check for a valid JWT in the Authorization header, and if it's present, the user will be allowed to access protected resources. If the JWT contains the necessary data, the need to query the database for certain operations may be reduced, though this may not always be the case.

If the token is sent in the Authorization header, Cross-Origin Resource Sharing (CORS) won't be an issue as it doesn't use cookies.

The following diagram shows how a JWT is obtained and used to access APIs or resources:

Why should we use JSON Web Tokens?

As JSON is less verbose than XML, when it is encoded its size is also smaller, making JWT more compact than SAML. This makes JWT a good choice to be passed in HTML and HTTP environments.

Security-wise, SWT can only be symmetrically signed by a shared secret using the HMAC algorithm. However, JWT and SAML tokens can use a public/private key pair in the form of a X.509 certificate for signing. Signing XML with XML Digital Signature without introducing obscure security holes is very difficult when compared to the simplicity of signing JSON.

JSON parsers are common in most programming languages because they map directly to objects. Conversely, XML doesn't have a natural document-to-object mapping. This makes it easier to work with JWT than SAML assertions.

Regarding usage, JWT is used at Internet scale. This highlights the ease of client-side processing of the JSON Web token on multiple platforms, especially mobile.

If you want to read more about JSON Web Tokens and even start using them to perform authentication in your own applications, browse to the JSON Web Token landing page at Auth0.